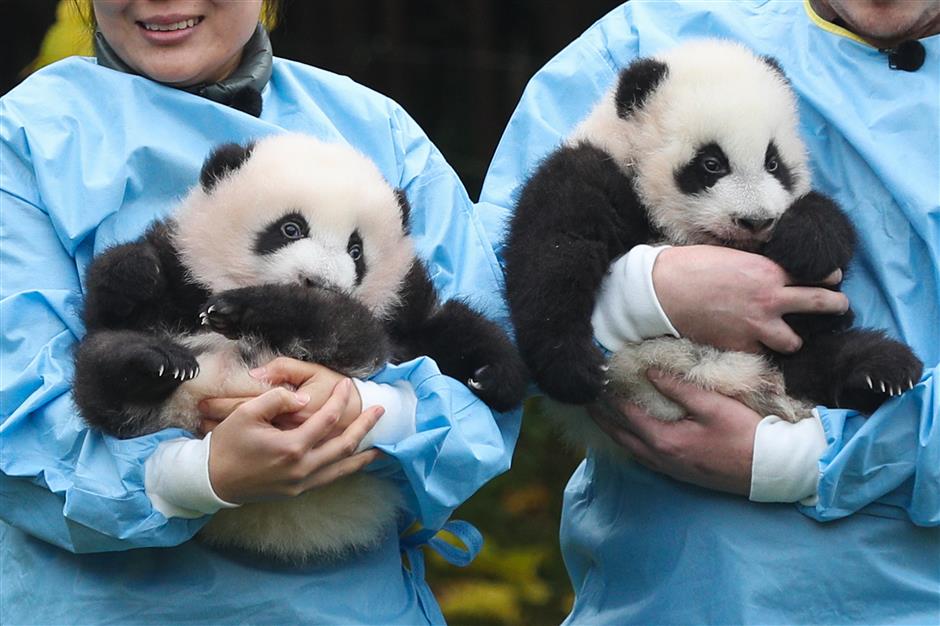 The two giant pandas born on August 8, 2019, in the Belgian zoo of Pairi Daiza were given official names on Thursday during a ceremony marking their 100-day celebration.

The twins have been named Bao Di and Bao Mei, translated as “Little brother of Tian Bao” and “Little Sister of Tian Bao.”

Members of the general public were able to contribute by going online and vote on the proposals made by Chinese Ambassador to Belgium Cao Zhongming and the whole panda team at Pairi Daiza, dubbed Europe’s best zoo.

After more than 73,000 people went online to vote, the Chinese ambassador was thrilled to announce that the dual names of Bao Di and Bao Mei won the contest.

“As Chinese ambassador to Belgium, I hope these giant pandas could help the Belgian people better understand China, and bond us in our friendship for the future,” said Cao at the ceremony.

If the panda babies develop well, Tim Bouts, zoological director at Pairi Daiza, and Guo Li, the Chinese expert sent to Belgium after the births of the two pandas, will authorize Bao Di and Bao Mei to leave their nursery and join their mother out where the public can see them.

This could be possible as early as December 14, when the park reopens its doors, according to a statement released Thursday by Pairi Daiza.

Belgium has really taken these pandas on board, and a media frenzy has surrounded Xing Hui and Hao Hao since their arrival in Belgium.

Hailed as “ambassadors” of China-Belgium friendship, Hao Hao and Xing Hui soon became one of the main attractions at Pairi Daiza.

With the births of these two babies, the zoo is now home to five giant pandas. Hao Hao and her companion Xing Hui arrived at the zoo in February 2014 aboard a chartered DHL plane. They are loaned from China for 15 years.

On June 2, 2016, a male panda was born and received the name of Tian Bao — “Treasure of Heaven”. With the births of Bao Di and Bao Mei, Pairi Daiza becomes the first European zoo to host five pandas. Giant panda Xing Guang celebrated his fourth birthday at the Shanghai Zoo in Changning District on Tuesday with cake, gifts and the company of... The China Conservation and Research Center for the Giant Panda on Tuesday welcomed the birth of the world's first pair of captive-bred giant panda...
Load more

The two giant pandas born on August 8, 2019, in the Belgian zoo of Pairi Daiza were given official names...