Passengers with China Eastern Airlines can now apply to receive a free electronic luggage tag through the airline’s app that allows travelers to check in and track luggage via their mobile phones.

The tag, said to be the first of its kind in the world, has a screen to show passenger and flight information after coming into contact with a passenger’s smartphone. A chip embedded in the tag also lets passengers follow their luggage on their phone.

Applications for free tags are open until September 10 through the latest version of China Eastern’s mobile phone app. A second round of applications will run between September 20 and October 7.

The carrier will evaluate the flight and luggage check-in records of applicants as it issues the free tags, the airline said on Tuesday. Frequent travelers between Shanghai and Beijing will have priority.

The airline first released electronic tags in July at the Hongqiao airport. They are mainly intended for flights between Shanghai and Beijing, and for Beijing’s new airport which is scheduled to open this month.

The carrier will gather data and suggestions from the first batch of users to improve the functioning of the tags, China Eastern said.

Many passengers expressed interest in the tags online after the opening of applications, but some also complained that they can only be used for flights by China Eastern and Shanghai Airlines.

“It would be better if other carriers could also recognize the tag,” said a passenger surnamed Li, who is among the first batch of users.

The new tags were in use during the first test run at Daxing International Airport in Beijing on July 20. China Eastern, Shanghai Airlines and China United Airlines operated 12 simulated flights and opened 16 check-in counters at the mega airport for the exercise. 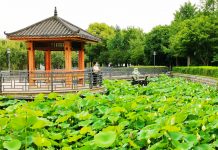 Passengers with China Eastern Airlines can now apply to receive a free electronic luggage tag through...