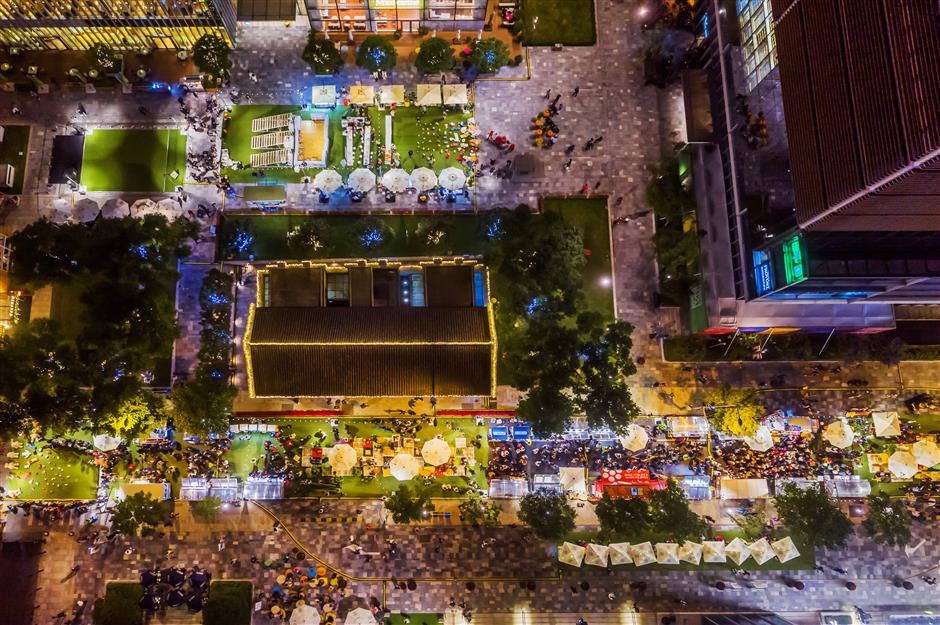 A pop-up fair in downtown Jing’an District opened to the public over the weekend, as the city is revitalizing its nightlife.

Anyi Road, between Changde Road and Tongren Road, is a small quite lane tucked away near the Jing’an Kerry Center, but on Saturday and Sunday night, it turned into a stylish weekend night market.

On Saturday, the neon-lit street was jammed. Visitors strolled around with beer and snacks in hand, and stopped by performers, games and shopping stalls.

The street was paved with artificial grass, and decorated with seasonal decorations such as orange blossoms and pumpkins.

Some of the city’s wanghong (Internet celebrity) florists sold seasonal blossom such as ping-pong chrysanthemum and pink hair grass.

“It’s so beautiful. I am so impressed by such a beautiful scene that I just want to buy a bouquet,” said Lilian Li, one of those who queued in front of Aura Lab to buy flowers.

Aura Lab is an emerging florist that has gained wide popularity for initiating the concept of “Ready to Flower” and selling bouquets. Not only young ladies like Li, but senior citizens were also seen in the queue. Local resident Wang, 62, said, “Everyone is here to buy flowers. So, I came to have a look, and I decided to buy as well.”

Both sides of the street were dotted with food stalls offering pumpkin pie, grilled sausage and Chinese fried dough sticks.

Not far away, yard games, such as ring toss, were popular. There were street artists and live performances. Tents were put up for young designers to sell their clothes and accessories. Benches were there for people to have a seat and eat their snacks. Litter bins, decorated as mail boxes, were all around.

“It’s amazing,” said Nicole Lambert, from California, who traveled to Shanghai with her boyfriend. With fried chicken wings in one hand and a cup of beer on the other, she said she had never been to a place like this before.

During a two-day trial on October 19 and 20, Jing’an Kerry Center saw a rise in customers, up 25 percent compared with previous weekends.

The plan for the area includes global debuts, fashion shows and new arrivals. Themed events, such as a beer festival and Christmas lights will be held along with displays of unique Shanghai culture. As the summer rolls in, the National Exhibition and Convention Center plans to hold four night markets next month to further boost the night...
Load more

A pop-up fair in downtown Jing’an District opened to the public over the weekend, as the city is revitalizing...