Home ENTERTAINMENT ‘Avengers’ Blast Past ‘Titanic’ To All-time No. 2 Disney and Marvel’s “Avengers: Endgame” has stormed into historic territory, earning US$2.19 billion worldwide in less than two weeks to become the No. 2 film of all time, industry watcher Exhibitor Relations reported Sunday.

That exalted number, which includes the film’s estimated take of US$145.8 million this three-day weekend in North America, pushes the superhero blockbuster past “Star Wars: The Force Awakens,” which netted US$2.07 billion, and even “Titanic” (US$2.18 billion).

Sony’s psychological thriller “The Intruder” came in second, at US$11 million. Michael Ealy and Meagan Good star as a young couple who buy a dream home in California’s Napa Valley unaware that its previous owner (Dennis Quaid) plans to take it back — at all costs.

In third was Lionsgate’s romantic comedy “Long Shot,” at US$10 million. Seth Rogen plays Fred Flarsky, an out-of-work journalist who has a romantic interest in his former babysitter (Charlize Theron) who — now a candidate for the US presidency — might seem a bit out of his reach.

STX Films’ animated film “UglyDolls” placed fourth, at US$8.5 million. The plot? A bunch of misfit dolls with pointy ears and bad teeth — residents of Uglyville — face a harsh world but finally discover their inner beauty. The voices of Kelly Clarkson, Nick Jonas, Wanda Sykes and Janelle Monae are featured.

In fifth place, hanging strong in its ninth week out, was Disney’s “Captain Marvel,” at US$4.3 million. Brie Larson stars as a former fighter pilot who gains superpowers. 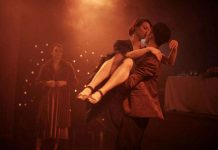 A pair of John Lennon's trademark round sunglasses are going up for auction along with a parking ticket given to Beatles drummer Ringo Starr,...
Load more

Disney and Marvel's "Avengers: Endgame" has stormed into historic territory, earning US$2.19 billion...