Beijing-based technology research group the China Computer Federation (CCF) is suspending communications with a U.S.-based engineers’ association in the latest example of fallout from the U.S. embargo on phone maker Huawei Technologies.

The CCF said on Thursday it would suspend dealings with the publications division of the Institute of Electrical and Electronics Engineers (IEEE), a day after the latter confirmed it will bar Huawei staff from participating in certain aspects of the peer review process for its research papers.

The conflict between the two organizations highlights how trade restrictions imposed on Huawei are reverberating in the broader scientific community.

Washington has accused Huawei of being tied to China’s government and has effectively banned U.S. companies from doing business with it for national security reasons.

In a statement published on CCF’s website, the research group criticized the IEEE Communications Society (ComSoc), which publishes research reports, for its decision. 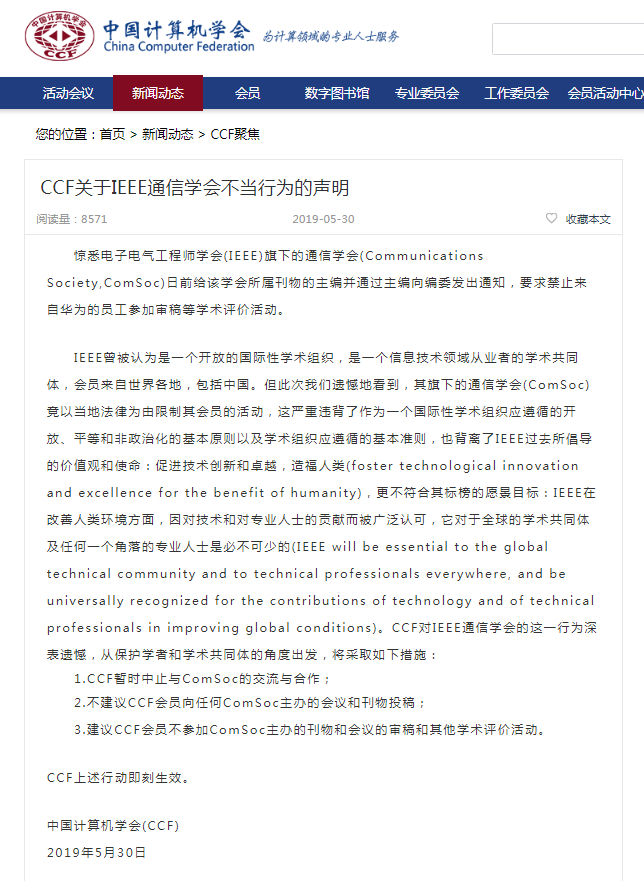 “The IEEE was once considered an open international academic organization, an academic community of practitioners in the information technology field, with members from all over the world, including China,” the CCF wrote.

“But this time we regret to see that its Communications Society (ComSoc) has restricted the activities of its members on the grounds of local laws, which seriously violates the open, equal and non-politicized nature of being an international academic organization.”

The CCF said it would suspend collaboration with ComSoc and called on CCF members to cease contributing to ComSoc events or research reports and to refrain from reviewing its papers.

On its website, the IEEE lists the CCF as one of its “sister societies.” Since 2016, the two organizations have jointly given out awards to computer scientists under the age of 40.

CCF’s Secretary-General Du Zide told The Paper that the decision was made after repeatedly checking the truth of the facts, and CCF is planning to hold a seminar regarding this issue.

“IEEE is known as an international organization which has members around the world,” said Du. “Registered in the U.S. cannot be the reason to restrict scholars from participating in relevant academic activities.”

Du also said during the interview with The Paper that he’s not worried about the influences to CCF caused by suspending communications with ComSoc.

“Individual experts’ contributions might be affected, but it’s necessary to have the courage to say no to the unfairness,” said Du.

In a statement addressing the peer review restrictions, the IEEE said Huawei employees who are members of the organization can retain their membership and voting rights, and also submit papers for publication.

News of the restrictions on peer review attracted broad attention in the Chinese academic community and on social media. In a widely read open letter published on WeChat, Peking University professor Zhang Haixia said she would resign from the organization in response to the measures.