Clear skies, rippling water and the gentle sound of the beautifully played Pipa drifted to the plaza alongside the lake. “My motherland and I cannot be separated for a moment…” were the words the little girl in the red dress sang, as if she was the first in voice of heaven. People gathered around her as the Dragon Boat Team entered, paddling along to the melody. Huanghai, the outstanding volunteer of the city, Shen Shengfeng, the young fire fighter, Huang Li, the champion of the bicycle race in the National Games venue and other Chongming youth representatives jointly sang “Me and My Motherland”. The highlight of the song being the national flag made of flowers and balloons merging into a red ocean.

Chongming District is known as “the Gateway of the Yangtze River,” Chongming Xuegong, Dongtan Wetland Park, Dongping National Forest Park, Changxing Island Country Park and other cultural and tourist spots are all blessed with beautiful scenery. The intangible cultural heritage of Chongming, such as Yingzhou Ancient Tune, Chongming Folk Song are also famous, attracting people from around the world to come and experience these treasures.

It was all part of the celebrations marking the 70th anniversary of the founding of the People’s Republic of China. If you happen to come across one of these flash mobs in the coming days, don’t be shy and join in! 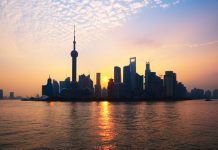 Clear skies, rippling water and the gentle sound of the beautifully played Pipa drifted to the plaza...