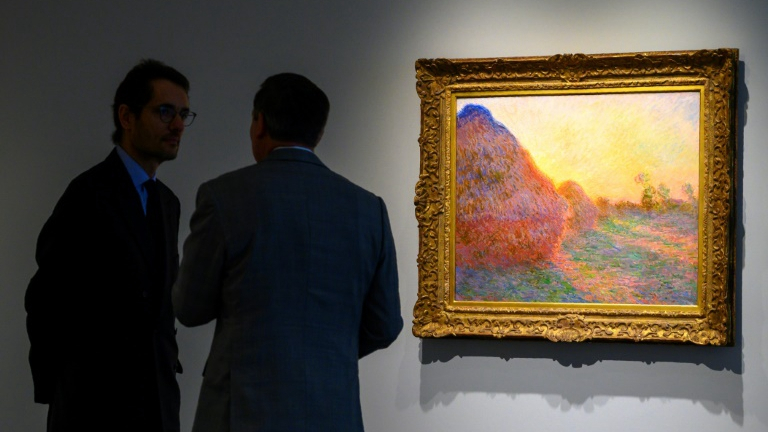 A Claude Monet painting from his celebrated “Meules” (Haystacks) series fetched 110.7 million U.S. dollars in New York on Tuesday in an auction record for the French Impressionist master.

The sale at Sotheby’s, the first time the work had come to auction since 1986, fetched one of the 10 highest prices ever seen at auction.

The total, which includes fees and the commission, was more than 44 times the previous record for the work.

It was the first time an Impressionist painting fetched more than 100 million U.S. dollars.

Monet painted his 25 “Meules” compositions during the winter of 1890-1891 at his home in Giverny, in France’s Normandy region.

In each piece, Monet showed the light and surroundings of the same scene as they changed at different times of day, with the varying seasons and during various types of weather.

Another painting from the series was sold in November 2016 by the Christie’s auction house in New York for 81.4 million U.S. dollars.

The piece sold at Sotheby’s is among the most immediately recognizable Monet paintings.

It distinguishes itself from others in the series by its vibrant paint palette, dramatic diagonal brushstrokes of varying directions that meet at the center and a unique perspective with only part of the first haystack appearing in the foreground.

“We feel, and I think people when they stand in front of this, would largely agree that this is an even nicer example” than the one sold in 2016, Sotheby’s Julian Dawes said.

The anonymous collector who brought the painting to be auctioned had purchased it in 1986 at Christie’s for just 2.5 million U.S. dollars.

The last record for a Monet painting was set in May 2018 during a Christie’s sale when his “Nympheas en fleur” (Water Lilies in Bloom) sold for 84.6 million U.S. dollars.

“This could be a defining moment for Monet’s market,” Dawes said.

Despite the allure and popularity of contemporary art, Dawes said Impressionism has an enduring quality.

“Something that I really like about impressionism, in general, is that the market tends to be really consistent. People love impressionism,” he added.

“It doesn’t change from generation to generation. These paintings are 150 years old and they’ve always been beloved.”