Coming in the midst of a “sci-fi fever” atmosphere brought about by China’s sci-fi blockbuster “The Wandering Earth,” “Shanghai Fortress” is believed to be the second runner in the relay of domestic-made sci-fi films. “The Wandering Earth,” which was released in early 2019, garnered over 600 million U.S. dollars in box office revenues, making it the second highest grossing Chinese film.

However, “Shanghai Fortress” only nabbed 15.4 million U.S. dollars last weekend since its premiere on Friday, according to Maoyan.com – China’s largest online film ticket service. Maoyan also predicted that its final box office would be no more than 21 million U.S. dollars. That means it’s almost impossible for the investors to recoup the reported 43-million-U.S.-dollar production budget.

The film, scoring 3.3 out of 10 on Douban.com – one of the most influential film review websites in China, recounts Shanghai’s battle against aliens who try to seize a hidden energy source found only on Earth in 2042. Audiences lamented on social media that it’s not a sci-fi film at all but a half-baked love story with a few sci-fi elements.

Teng Huatao, the director, made an apology on Weibo (China’s Twitter-like microblogging service), saying that he felt sorry for letting audiences down and that he never meant to shut the door for Chinese-made sci-fi films.

“I can see the efforts the crew members made, either the special effects or general designs, although the storyline is indeed too weak. But it can’t represent China’s sci-fi films as a whole. As the industry develops, we should have confidence in our own sci-fi movies,” said Rao Shuguang, secretary general of the China Film Association. 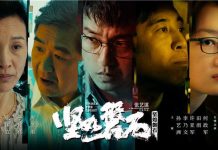