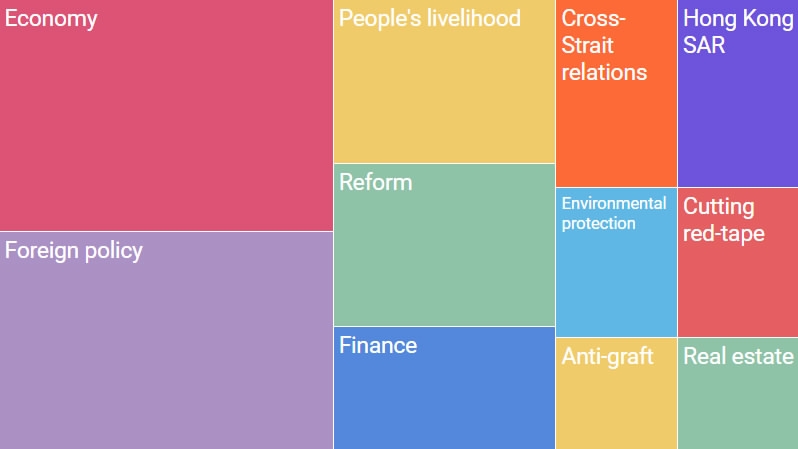 Li Keqiang, who was endorsed as Chinese premier by lawmakers on Sunday, is set to hold a press conference on Tuesday after the closing meeting of the first session of the 13th National People’s Congress at the Great Hall of the People in Beijing.

Li meeting the press has been a fixture at the end of the annual Two Sessions since he assimilated the post of Chinese Premier in 2013.

Reporters’ questions over the past years have ranged from reform policies, anti-graft campaign, environmental protection, finance and people’s livelihood, to Chinese mainland’s relations with Taiwan and Hong Kong.

Economy and foreign policy are the top two focal points of media, with reporters asking 17 and 16 questions respectively on the topics since 2013.

Media inquiries have reflected the hot issues at the time.

For instance, questions from a CNN reporter in 2014 were related to the Malaysia Airlines Flight 370, which disappeared in March that year while en route from Kuala Lumpur to Beijing. Li said the Chinese government had activated a comprehensive contingency response and search operation, and would fully perform its duties and enhance cooperation with other countries and regions to ensure safety of Chinese nationals.

In 2015, a reporter asked about an incident that took place a day earlier: A Myanmar warplane dropped a bomb on a sugarcane field in a Chinese city near the border with Myanmar, killing five villagers and injuring eight others.

Li expressed condolences to the families of the victims, and said China has the responsibility and ability to uphold the stability of border area with Myanmar and protect the lives and property of Chinese citizens.

In last year’s press conference, answering a Nikkei journalist on the rising tensions over the nuclear tests and missile programs of the Democratic People’s Republic of Korea (DPRK), Li called for all parties to return to talks.

“We hope that all the parties concerned will work together to de-escalate the situation, get issues back on the track of dialogue and try to find lasting solutions,” Li said.

How To Get Your Health QR Code Using Alipay

Foreigners in Shanghai can now apply for a health QR code to help track the current epidemic situation. Here's how to do it. Step 1:... Guide To Using Masks For Prevention Against Novel Coronavirus

Masks can prevent a person from contracting respiratory diseases and reduce the risk of novel coronavirus infection. Basic principles of use The National Health Commission... The Evolution Of China’s Fighter Jets Over Past 70 Years

Li Keqiang, who was endorsed as Chinese premier by lawmakers on Sunday, is set to hold a press conference...