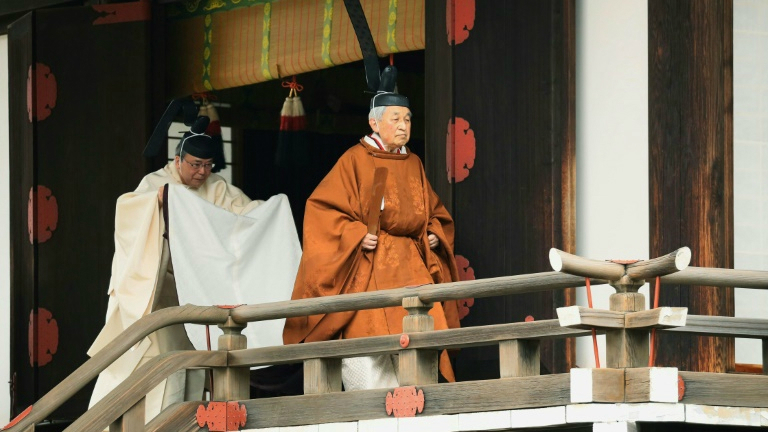 Draped in ornate golden-brown robes and wearing a towering black hat, Japan’s Emperor Akihito on Tuesday kicked off ceremonies for his abdication, the first in 200 years for the world’s oldest monarchy.

Akihito is handing over the Chrysanthemum Throne to his eldest son, 59-year-old CrownPrince Naruhit, in a series of solemn rituals that also usher in the new imperial era named “Reiwa,” meaning beautiful harmony, that will last throughout the new monarch’s reign.

As crowds began to gather early Tuesday in the drizzle outside the sumptuous Imperial Palace in central Tokyo, Akihito performed a ritual to “report” his abdication to his ancestors and the Shinto gods at several “sanctuaries.”

Akihito, 85, was the first Japanese monarch to take the throne under a post-war constitution that defines the emperor as a symbol of the people without political power.

His father, Hirohito, in whose name Japanese troops fought World War II, was considered a living deity until after Japan’s defeat in 1945 when he renounced his divinity.

Akihito, together with Empress Michiko, his wife of 60 years and the first commoner to marry an imperial heir, carved out an active role as a symbol of reconciliation, peace and democracy.

“I think the emperor is loved by the people. His image is one of encouraging the people, such as after disasters, and being close to the people,” Morio Miyamoto, 48, said as he waited near a train station in western Tokyo.

“I hope the next emperor will, like the Heisei emperor, be close to the people in the same way,” he said.

Akihito, who has had treatment for prostate cancer and heart surgery, said in a televised address in 2016 that he feared his age would make it hard for him to carry out his duties fully.

Queen Elizabeth II will host a showdown meeting with Prince Harry on Monday in a bid to solve the crisis triggered by his bombshell... Prince Harry and his wife Meghan stunned the British monarchy on Wednesday by quitting as front-line members -- reportedly without first consulting Queen Elizabeth... Tourism Australia has delayed the rollout of a new advertising campaign on account of the devastating bushfires.  The national tourism agency on Sunday announced it...
Load more