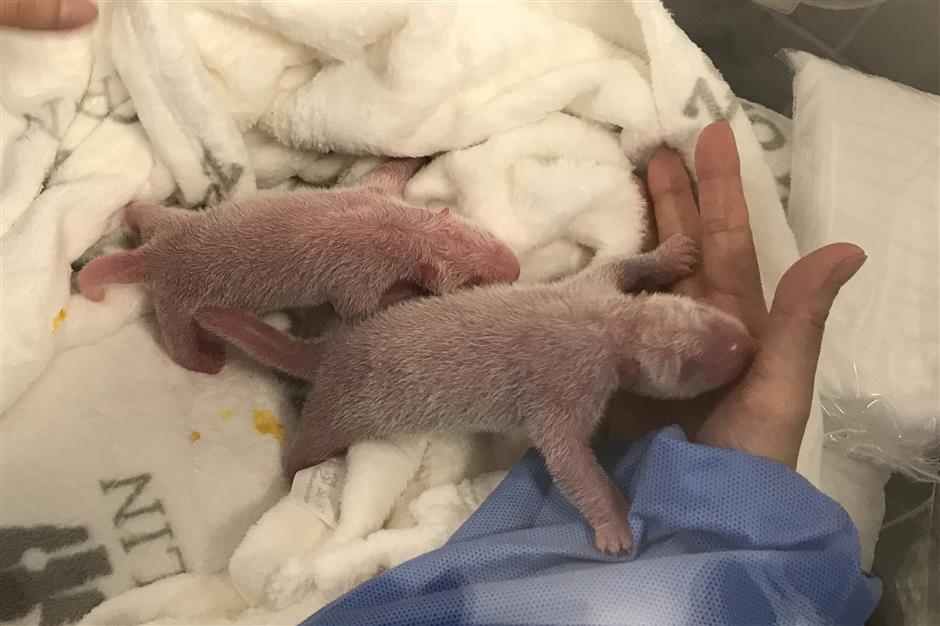 According to a press statement issued by Zoo Berlin, the first panda cub was born on Aug. 31 at 6:54pm (GMT 0454) following a gestation period of 147 days. Less than an hour later, the second cub was born. The cubs weigh 186 and 136 grams respectively, and seemed lively and alert. Their genders have yet to be determined.

“Meng Meng became a mom-twice! We are so happy, we are speechless,” Zoo Berlin tweeted on Monday morning.

The panda couple mated in April and later artificial insemination was also performed on Meng Meng to boost the likelihood of pregnancy, revealed by Zoo Berlin earlier in August.

Immediately after giving birth, the new mother knew just what to do: she placed the tiny creature gently on her belly and began to warm it lovingly with her big paws and breath, and the soft fur of her cheeks, according to the press release.

“Even though these are the first offspring born to our young female panda, she is already doing a wonderful job as a mom. In the beginning, the cubs have to be fed roughly every two to three hours and are dependent on the body heat of their mother to keep warm,” said Andreas Knieriem, director of Zoo Berlin.

The team at the Zoo Berlin, together with experts from the Leibnitz Institute for Zoo and Wildlife Research as well as panda experts from China, had been monitoring the giant panda mother around the clock.

The cubs were taking turns with their mother in a rhythm of about two to three hours and were otherwise cared for in a warm incubator by the Chinese breeding experts.

As pandas that give birth to twins usually only raise one of the cubs, Zoo Berlin has decided to actively support Meng Meng in the rearing process in close cooperation with Chinese experts from the Chengdu Research Base of Giant Panda Breeding.

In the past, breeding attempts with other giant panda in Berlin had not been successful, making the twins born at the weekend a first.

“What fantastic news! The whole of Berlin is delighted about the new arrivals,” Berlin’s mayor Michael Mueller was quoted in the press statement as saying.

Mueller welcomed the fact that Berliners would “soon be able to visit the black and white twins”, which was “inconceivable without highly professional work and a lot of passion”.

“Only 1,864 adult pandas remain in their natural habitat. Every single young animal thus contributes significantly to the conservation of the entire species,” said Andreas Knieriem.

Meng Meng and the cubs will be temporarily out of sight for visitors until further notice.

The two panda bears were allowed to stay in Berlin for 15 years while the newborn cubs would also remain in Berlin for two to four years, according to the German zoo director Knieriem.

“Even in their natural habitat, young panda bears and mothers will eventually go their separate ways, pandas are loners. That would also be the time when the offspring would probably move to China,” noted Knieriem. The six-year-old giant panda Meng Meng, sent by China to Germany in 2017 together with male panda Jiao...