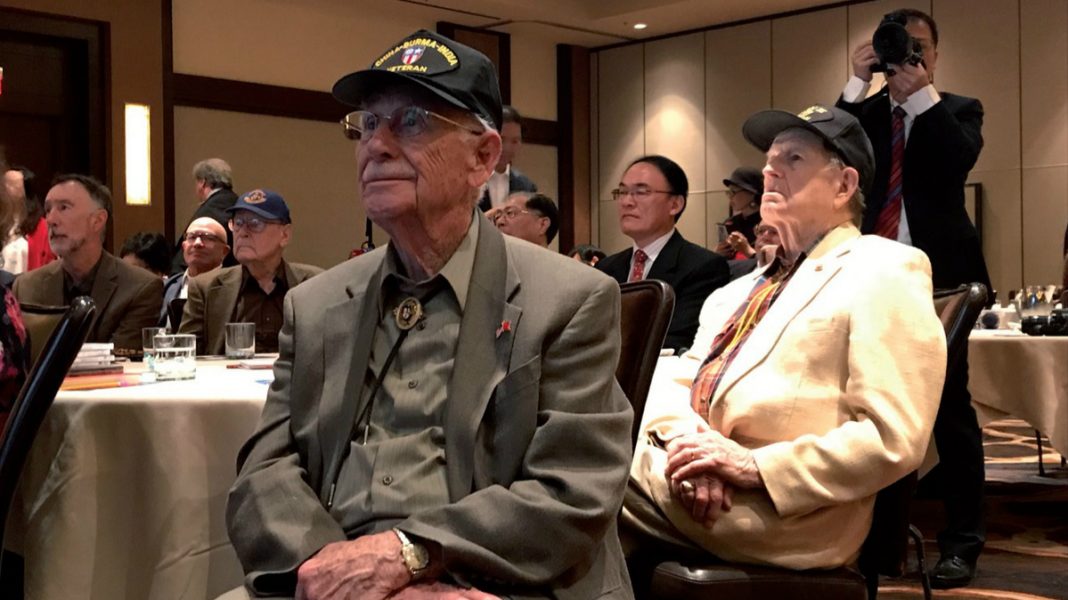 Organizers of an “emotional and powerful” reunion hope to use the event to reflect on the US-China friendship of more than 70 years ago, “to honor our father’s flags”, as they put it.

More importantly, they want to demonstrate a shared resolve to carry on the goodwill, said Jeff Greene, one of the organizers, in referring to a “partnership that was forged through fighting side by side against Japanese invaders together during World War II”.

The fourth Sino-American Second World War Friendship and Flying Tiger History Conference, a two-day symposium centered on a theme of history-learning and story-sharing, opened in Las Vegas on Friday.

Eight Flying Tigers veterans, together with their sons, daughters and family members, joined the event with elected US officials and representatives from the Chinese community.

In his keynote speech at the opening ceremony, Chinese Consulate General in San Francisco Wang Donghua expressed his “utmost respect” for the Flying Tiger heroes and encouraged all to continue to use the “glorious wartime cooperation” against the Japanese invaders as a “mirror” to strengthen bilateral exchanges “in various fields”.

The event was held at a “critical moment”, said Wang, referring to the ongoing trade frictions between China and the US.

In 1941, The First American Volunteer Group of the Chinese Air Force, nicknamed the Flying Tigers, was composed of pilots from the US Army Air Corps, Navy and Marine Corps, recruited under US President Franklin Roosevelt’s authority and commanded by General Claire Lee Chennault.

Household names in China, Flying Tiger pilots engaged the Japanese from the sky with their Chinese counterparts, expediting an end to World War II in 1945.

Cynthia Chennault, daughter of the late General Chennault, said the Flying Tigers’ history was not forgotten and should be emphasized to reflect US-China friendship, respect and collaboration.

The event was co-organized by the Sino-American Aviation Heritage Foundation and the Chinese People’s Association for Friendship with Foreign Countries.

Mel McMuller, who will turn 94 in a few weeks, recalled vividly how he enlisted and served in the China base of the Flying Tigers.

“It all started from the Japanese bombing of Pearl Harbor,” he said. “I told myself to do something.”

After training, the 18-year-old was sent to China in 1944 to the Flying Tigers’ 14th Army Air Corps, 308th Heavy Bomb Group, 425th Squadron. He served as a nose turret gunner/assistant engineer.

The plane he flew on with his crew was the Dragon Lady, which was stationed in Kunming in Yunnan and Chengdu in Sichuan. In total, they flew roughly 200 hours of air combat missions.

David Hayward, meanwhile, emphasized the invaluable alliance that the US pilots established with the Chinese people, soldiers and civilians.

“They (the Chinese) are all good people. We can’t achieve whatever we have without sacrifices and contributions of our Chinese friends,” he said, adding that history will help keep the two nations on the right track. The COVID-19 outbreak may have given a hospital patient referral system a kickstart that it needed after having trouble getting going for the past... The city’s health commission and traditional Chinese medicine (TCM) administration have issued a guideline on the innovation and development of TCM to provide improved... As part of the Double Five shopping festival more than 2000 products will be launched by 50 Shanghai time-honored brands at Yuyuan Gardens. Many...
Load more

Organizers of an "emotional and powerful" reunion hope to use the event to reflect on the US-China friendship...