Home all about panda Giant Pandas Leave For Russia 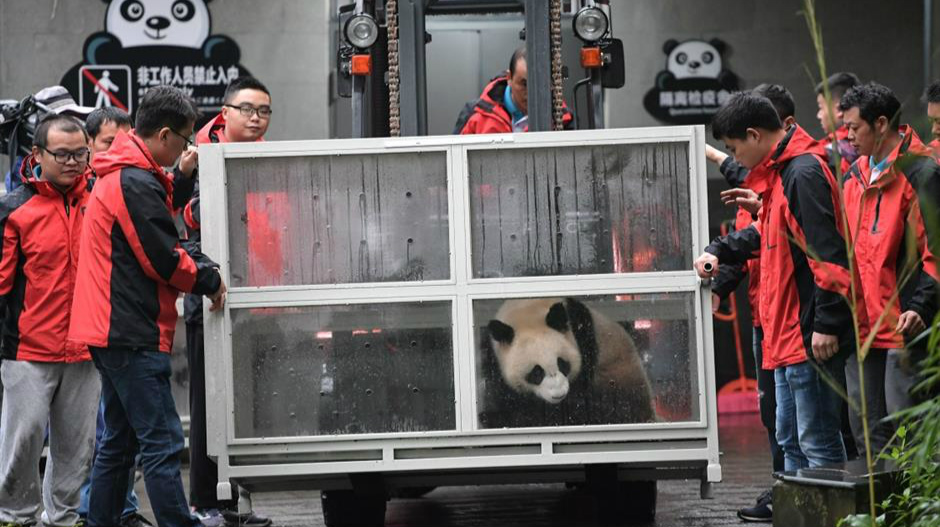 A pair of giant pandas took off in Chengdu, capital of southwest China’s Sichuan Province, in a plane bound for Moscow on Monday.

Chinese researchers held a send-off ceremony for a pair of giant pandas, Ru Yi and Ding Ding, who will stay in Moscow for a 15-year collaborative research.

Ru Yi, a three-year-old male, and Ding Ding, a two-year-old female, will arrive in Moscow at 10pm Beijing Time the same day, the China Conservation and Research Center for the Giant Panda (CCRCGP) in southwest China’s Sichuan Province said.

Li Shuming, deputy head of the National Forestry and Grassland Administration, presided over the send-off ceremony at CCRCGP’s Bifengxia base in Ya’an of Sichuan. Svetlana Akulova, head of the Moscow Zoo, also attended the ceremony.

Akulova said she hopes Russian experts will contribute to the field of panda research and panda reproduction.

Staff at the center prepared buns, bamboo sprouts, carrots and baby formula for the pandas in the journey. Caretaker Wang Pingfeng and veterinarian He Ming are on board with the pandas to Russia.

“My job is to keep them calm in case of any stress symptoms. We will make sure they are accustomed to their new life in Moscow,” said Wang.

“Ru Yi is outgoing and vivacious, but Ding Ding is quiet. We have carried out quarantine and health checks for them. They are in good shape,” said He Ming.

On February 28, the China Wildlife Conservation Association and the Moscow Zoo signed an agreement on the protection and research cooperation of giant pandas.

Six zoologists and two veterinarians from the Moscow Zoo spent a month at the center to get acquainted with the pandas and learn how to work with and take care of the animals.

The Moscow Zoo has renovated their panda hall. It also signed a long-term contract with a Sichuan bamboo and sprouts supplier to airlift the feed to Moscow.

The zoo will grow bamboo in southern Russian cities for the two pandas. “We will not try to alter their eating habits for now, but we will see if they like the bamboos grown in Russia. If they do, we will add the local bamboo to their diet in the future,” Akulova said.

The Moscow Zoo will invite the public to give new names to the pandas. Akulova said they will also take the Chinese naming tradition into account. A pair of giant pandas took off in Chengdu, capital of southwest China's Sichuan Province, in a plane...