A new Guinness world record has been set in the Wuyuan County in north China’s Inner Mongolia Autonomous Region for “most lambs spit-roasted simultaneously.”

On Monday evening, a total of 500 lambs were roasted at the same time by different cooks, and all of them became ready to eat after two and a half hours.

After the examination by a certification officer of Guinness World Records, 499 met the standards for the record, as one of the lambs was overcooked.

On Tuesday, Jinmai Lift Technology Co, organizer of the activity, was awarded a Guinness World Records certificate for “most lambs spit-roasted simultaneously.”

Wuyuan is a major sheep breeding base in Inner Mongolia. The organizer said it hoped to promote the reputation of local mutton with the activity.

Whole roasted lamb, a traditional dish of the Mongolian ethnic group in China, is usually prepared for distinguished guests or on important occasions. 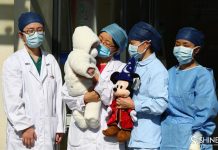 A new Guinness world record has been set in the Wuyuan County in north China's Inner Mongolia Autonomous...