With the second China International Import Expo expected to draw a huge attendance, the Shanghai government is ready to ensure everything goes smoothly for domestic and foreign visitors alike.

Last year, visitors taking the Metro could only enter the venue, the National Exhibition and Convention Center, from outside, but this year they will be able to use Line 2 exits that are closer to the entrance gates.

Shanghai police said on Tuesday that Exits 4 and 5, which are inside the venue, will allow entrance during the event.

This will reduce the time for visitors to walk from the Metro station to the exhibition halls to 10 to 30 minutes, half the time it took last year, police said.

Other measures have been taken to relieve the burden of the crowd of visitors entering through the west side of the venue. Yang Xiaoxi, vice director of the transportation commission, said about 80 percent of all visitors entered from that side last year.

This year, shuttle buses, taxis and parking lots near the eastern entrance are expected to take over 27 percent of the visitors, and a new underground path linking the Zhuguang Road station on Metro Line 17 and the northern square of the venue is expected to take over 12 percent, Yang said. 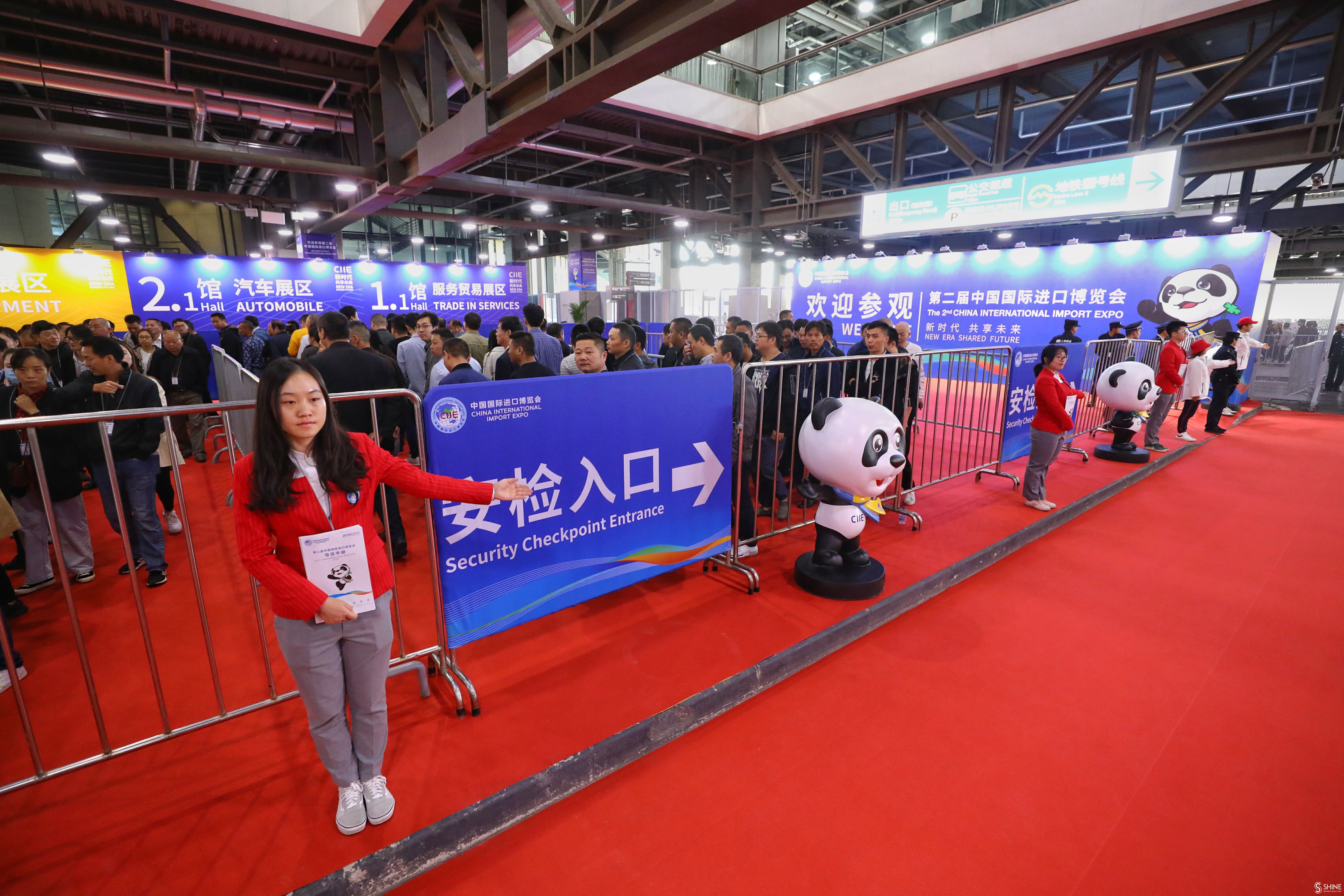 A total of 5,881 volunteers will serve the second CIIE, with about 4,100 working inside the venue, of whom about 3,600 will direct visitors and answer their questions.

About 5,100 of the volunteers are Chinese students from 38 universities and colleges in Shanghai, and about one in five had volunteered at last year’s expo, according to Wu Bin, vice secretary of the Shanghai Youth League which is in charge of volunteer recruitment for the event.

Working alongside the students from Shanghai will be those recruited from other provinces and foreign students and students from Hong Kong who are studying in Shanghai, Wu said.

“We have laid a stronger emphasis on recruiting student volunteers studying English this year, and about 80 volunteers speak over 10 other foreign languages than English,” he said.

A total of 250 volunteers from the local Red Cross association will also serve at the expo, while the number of hospitals commissioned to provide medical services for expo visitors has risen from 18 last year to 33.

Qin Jing, vice director of the health commission, said the nearest top-range hospital, the western branch of Huashan Hospital, is less than 3 kilometers away, and anyone needing hospital treatment could be transported to the hospital in 3 minutes. The number of standby ambulances at the venue has been increased from five to seven and the number of portable automated external defibrillators (AEDs) has been increased from 50 to 58.

“We have improved the distribution of the AED devices within the venue so that the volunteers can get and use them in first aid as soon as possible when a case arises,” Qin said.

At the news center, Li’s company is providing broadband of 60G in total with 1,300 wire access points for journalists.

The government said it will also ensure that quality public utilities, weather, fire control and food safety services will be provided at the expo.

A major difference from the expo than last year is that the household waste-sorting regulation which came into force in July this year requires proper waste sorting at the venue.

Ling Hongtao, vice director of the environment cleaning management department of Shanghai Landscaping and City Appearance Administrative Bureau, said 80 groups of containers for food waste, residual waste and recyclable waste will be found throughout the venue, with property management staff on duty to offer guidance for visitors. Detailed guidelines in English will be found on posters and distributed to visitors who don’t speak Chinese.

Ling said volunteers will also be trained in waste sorting so they can help visitors.

It’s estimated that the expo will generate 200 tons of waste a day.

The second CIIE will be held from November 5 to 10. Tech Devices At 3rd CIIE To Focus On Sustainable Development

The third China International Import Expo(CIIE) will expand the equipment exhibition area and highlight energy conservation and environmental protection. Other development trends in manufacturing will... Epidemic Related Products To Be Showcased At 3rd CIIE

A new section that will display epidemic-related products will be set up at this year’s China International Import Expo. Products and equipment that played...

The Swiss luxury group Richemont will make its debut at the third China International Import Expo and develop an all-round cooperation with the CIIE...
Load more

With the second China International Import Expo expected to draw a huge attendance, the Shanghai government...