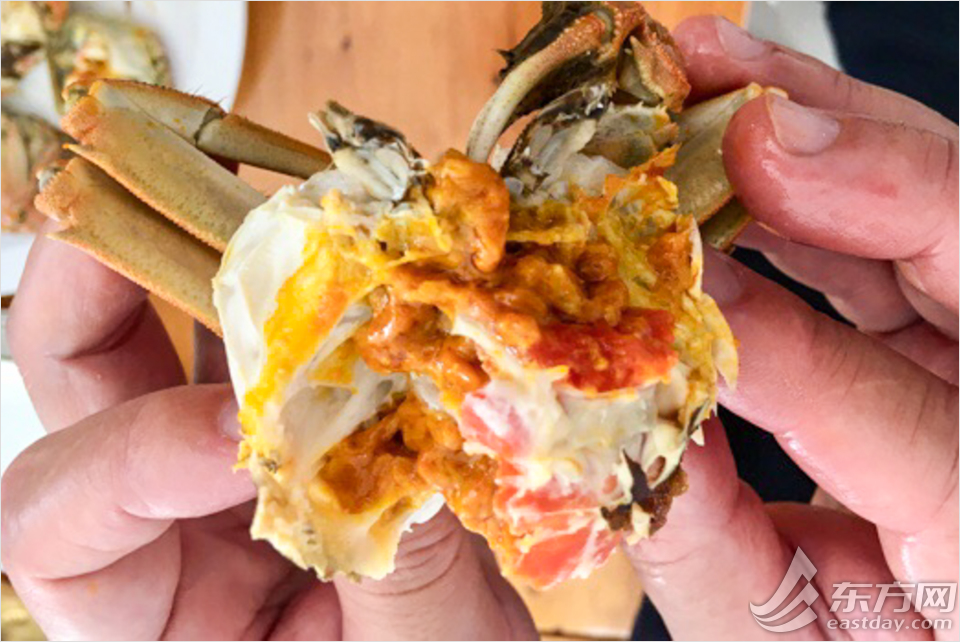 The Huangpu River mitten crab fishing opened on Monday in Songjiang District, the river’s source, with the heaviest “crab king” of the day weighing 420 grams.

This year’s opening was a few days later than last year due to higher temperatures in early days and the crabs were bigger.

“Big crabs” — male crabs weighing up to 200 grams and females up to 150 grams — accounted for about 80 percent of the total, a record high.

At the Yuyue (fish dive) Aquatic Product Cooperative in Songjiang’s Maogang area, the largest breeding base of home-breed mitten crab in Shanghai, fishers lifted their crab nets out of the water on Monday morning.

“We created a ‘Songjiang mode’ for our crab breeding. The crab density in our ponds is low. We only have 500 to 600 crabs in each mu (666.67 square meters) of the pond. But the waters are all covered by certain aquatic plants to form a good ecological system for the crabs,” Lang told Shanghai Daily. “So the crabs can grow healthy and in good quality. And we haven’t used any chemicals on them.”

The cooperative used local aquatic plants, including eel grass, to improve the water quality and upgraded their oxygenating facilities to simulate natural phenomenon like tides.

A farmer said that in such an environment the crabs keep their wild nature. When they tried to catch them, they ran away very quickly and sometimes a few inexperienced fishermen would get hurt by them.

Lang said they have both online and offline stores. About 70 percent of the crabs will be on local tables while the rest will be sold to other provinces and exported to countries such as Japan, South Korea and Singapore.

Lang’s team taught other crab breeders in Songjiang how to get high quality crabs. Pan Leiming, a member of the Shanghai Kunxiu Aquatic Product Cooperative, was one who benefited.

“In Songjiang, we have a stable crab breeding environment and a good marketing platform, with no worry about the technologies,” said Pan, who has been working in aquaculture for two decades and started to breed mitten crabs in 2013.

Wang Chenghui, a professor at Shanghai Ocean University and an expert on mitten crab, helped develop new and better mitten crab species for local breeders. The current Jianghai (River and Ocean) 21 species is the 7th generation and it took his team 14 years to cultivate. He said they will continue their research to bring bigger and nicer mitten crabs for local residents. Chinese foodies are in for a treat as the Dim Sum Festival kicks off with mouthwatering discounts that are up to 50% off. The... If you are a crayfish lover, then springtime is the best time of the year to eat them and in Shanghai, people can’t get...
Load more

PUDONG GEARS UP FOR CULTURAL FESTIVAL

The Huangpu River mitten crab fishing opened on Monday in Songjiang District, the river's source, with...