Home EYES ON CIIE LVMH To Bubble At CIIE Again

Global luxury brand LVMH is one of the latest of dozens of French companies to sign up for this year’s second China International Import Expo, which has added a new high-end consumer goods zone.

The aim is to help global brands take advantage of the CIIE to cash in on the booming Chinese market.

Sun Chenghai, deputy director of the China International Import Expo Bureau, said at the signing ceremony with LVMH that China, with a market of nearly 1.4 billion people, is seeing booming consumer spending.

It is expected that in the next 15 years, China will import more than US$30 trillion in goods and US$10 trillion in services.

“We believe that French companies such as LVMH will further expand their exports to China through the Import Expo, bringing more high-quality products and services to Chinese consumers, which can be a new bright spot in Sino-French economic and trade cooperation,” Sun said.

Bernard Arnault, chairman and CEO of LVMH, said that the first Import Expo has been a great success, and he believed the second would be even better.

The company will showcase its brands — from champagne to luxury luggage, cosmetics and beyond — through high-profile events including conferences and product launches during the exhibition “to pay tribute to the specific link that connects Chinese consumers to the LVMH Group.”

For the second session, more than 30 French companies had signed up for the expo by March 15, covering a total space of more than 6,000 square meters.

Both were here last year. 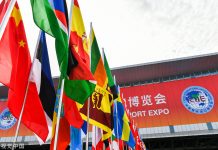 Global luxury brand LVMH is one of the latest of dozens of French companies to sign up for this year's...