Nanpu Bridge, the first bridge across the Huangpu River in Shanghai’s downtown area, has undergone continuous upgrades for the last four years. There have been 14 upgrades, including safety facilities, the main bridge, 11 gateways, and traffic monitoring. Nanpu Bridge was put into use in 1991 as the second largest cable bridge in the world. The complexity and advanced level of technology were rare in bridge construction in China. After more than 20 years of use, the Nanpu Bridge experienced some problems such as component wear. In addition to regular maintenance, the Nanpu Bridge has added a lot of new equipment. 203 sensors throughout the bridge reflect the structure and operational status of the bridge at any time.

In order to prevent the bridge from deformation, the Nanpu Bridge is equipped with a device to relieve the thermal expansion and contraction of the bridge. Because of the uneven settlement of Pudong and Puxi ground and heavy traffic, the device on the west side of the bridge is seriously damaged and will replaced by a new type of a new material expansion device. 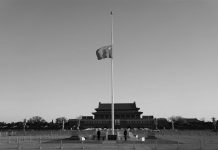 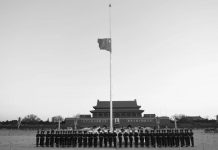 Flags Fly At Half-Mast To Mourn Martyrs, Victims Of COVID-19

The Chinese national flag was flown at half-mast at downtown Beijing's Tiananmen Square on Saturday to mourn people who died in the fight against... Those Who Lost Lives In Pandemic Remembered

The Chinese national flag was flown at half-mast at People's Square on Saturday to mourn martyrs who sacrificed their lives in the battle against...
Load more

Nanpu Bridge, the first bridge across the Huangpu River in Shanghai's downtown area, has undergone continuous...