The 12-kilometer route links up more than 50 spots in three districts, namely Huangpu, Jing’an and Xuhui. It starts from the Shanghai Tourist Distribution Center in Xuhui District and winds up at the Shanghai Bund Tourist Service Center.

Historical buildings including Bibliotheca Zi-Ka-Wei, Shanghai’s oldest library, the Wukang Apartments, previously known as Normandie Apartments with history dating to 1924, and the iconic Park Hotel, designed by Laszlo Hudec, are also part of the route. Visitors will also pass museums, including T’ou-Se-We Museum, Shanghai Film Museum, and Shanghai History Museum, as well as parks like Xujiahui Park and Jing’an Park.

The route allows people to savor the charm and enchanting view of the city’s garden villas, historical buildings and streets, and stories behind its revolutionary past, the Shanghai Administration of Culture and Tourism said.

Other stops worth visiting on the route include the Soong Ching Ling Memorial Residence, the renowned balcony of a Spanish-style villa on Wukang Road nicknamed “Romeo’s balcony,” and Zhangyuan Garden, a well-preserved shikumen community.

The Soong Ching Ling Memorial Residence on Huaihai Rd M. is where Soong spent most of her life. The main building, where Soong lived, was built in 1920 and overhauled in 1990 and 2006. Some hardware and other auxiliary facilities have been repaired.

“I am interested in taking a stroll in sunny weather to some spots such as the T’ou-Se-We Museum and ‘Romeo’s balcony,’ which I didn’t know about in the past,” Chen Jing, a local resident in her 30s, said. “I was born and grew up in Shanghai, and I am curious about the stories behind it.”

“These places are very classic and I would like to take a walk with my friends,” said Celine Chanut, from France, who has been living in Shanghai for years.

The city’s tourism authorities have released several walking tour routes and organized trips based on these routes in the past.

They include five routes themed on “industrial evolution,” “modern times,” “literature and art flavor,” “modern landscape” and “date with the West Bank,” ranging in length from 2.6 to 4.1 kilometers. 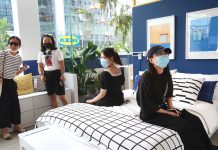 Passengers To China Must Take Nucleic Tests 5 Days Before Departure

Passengers taking flights to China must have negative nucleic tests results within five days prior to the boarding, Chinese authorities said on Tuesday. All passengers...
Load more