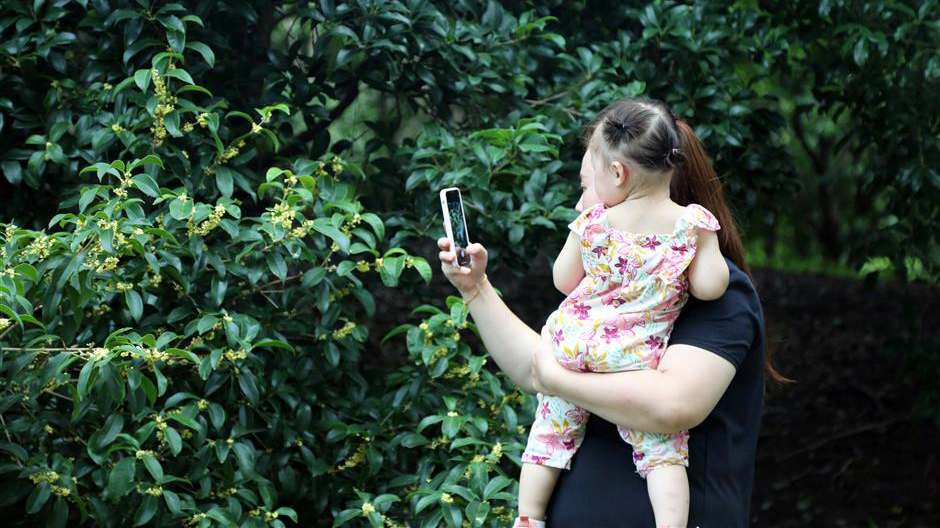 The September air is filled with the aroma of early varieties of osmanthus, which has flowered at Shanghai Botanical Garden in Xuhui District.

The debut of the tiny pale yellow and white blooms this year is a week earlier than last year because of the current temperature drop, said Wang Yuqin, a botanist at the garden.

A wave of osmanthus flowering is expected between September 8 and 12, he said.

Meanwhile, heavy rain and gales are expected in east areas of Shanghai on Friday with total rainfall reaching 30 to 50 milliliters under the influence of typhoon Lingling, the city’s meteorological bureau said.

The bureau expects Lingling to pass areas at the same latitude as Shanghai on Friday night. The center of Lingling will be about 250 to 350 kilometers from Huinan Town in the Pudong New Area at that time, the bureau said.

Temperatures should range between 25 and 29 degrees Celsius on Friday.

On Saturday, showers are forecast with temperatures from 24 to 29 degrees.

The following three days will also see rain, according to the bureau.

On Sunday, temperatures could rise to 30 degrees with a low of 25 with showers and cloudy conditions.

On Monday, a thunder shower is forecast, with high temperatures dropping by degree. As schools remain closed during the COVID-19 epidemic, vegetable farms that normally sell to schools are now selling their produce to residential communities. Watch... Shanghai police said on Tuesday that they will continue to offer visa, stay or residence permits extension for foreigners in Shanghai while measures against...

Metro passengers now have their temperature checked at 106 stations around the city, with all lines covered, Shanghai Metro said on Sunday. The stations include...
Load more

The September air is filled with the aroma of early varieties of osmanthus, which has flowered at Shanghai...