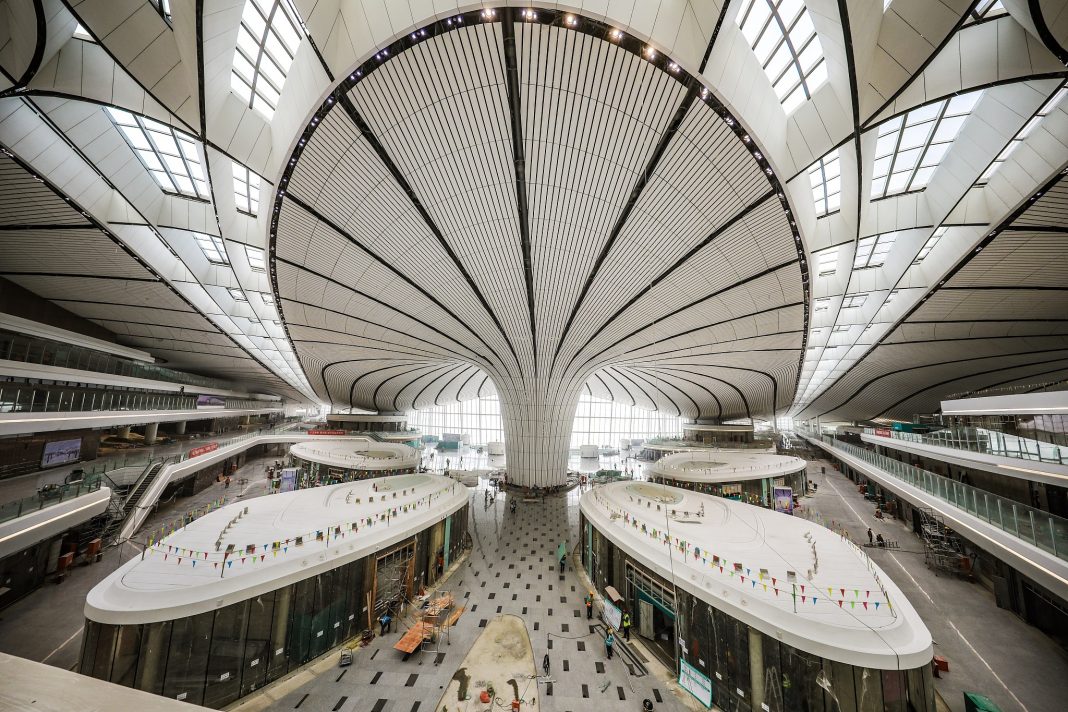 Shanghai-based airlines completed the first massive test run at Beijing’s new mega airport on Friday as the sprawling air hub gears up for its grand opening in September.

A facial recognition check-in facility has also been unveiled for the first time.

China Eastern, one of the base airlines at the new airport, has deployed over 1,100 people, 400 pieces of check-in luggage machines, 122 support vehicles and 80 information systems for the trial, the carrier said.

Other details such as the sign-in of flight attendants, their shuttling and entering the terminal buildings as well as services to passengers, luggage and cargo transport have also been practiced.

The minimum connecting time, or the amount of time that is considered sufficient for a passenger to transfer between an arriving flight and a departing flight on the same ticket, will be within an hour, the carrier said.

As a highlight, the facial recognition check-in facility allows passengers to check in a flight at the ticket counter without identity card or passport.

Daxing airport is expected to open on September 30. It aims to meet the country’s soaring air-service demand and relieve the capital airport of the tight flight pressure.

The new airport near the junction of Beijing’s Daxing District and Langfang in north Hebei Province is expected to handle 45 million passengers annually by 2021 and 72 million by 2025, making it one of the busiest airports in the world on par with Hartsfield-Jackson Atlanta International Airport in the United States.

Covering a land area of 47 square kilometers, the new airport will be double the size of the capital airport, which is currently the largest airport in China.

Four runways will be ready when the airport opens in autumn with a total of seven runways planned to handle the growing number of air travelers.

China Eastern and China Southern airlines will relocate 10 percent of their flights to Daxing airport. China United Airlines, Capital Airlines, Hebei Airlines and Xiamen Airlines will also be among the first batch of carriers to relocate to the new facility.

China Eastern will keep operating most of its Beijing-Shanghai express flights to the capital airport, but relocate some flights to the Daxing airport in winter, the Shanghai-based carrier said. Sitting by the window, Cheng Chuchu (pseudonym) in Wuhan, a megacity in central China, bathed in the morning sun and opened a book she... As the battle against COVID-19 continues, everyone is doing their part, including several consuls general based in Shanghai, who have donated medical supplies to...
Load more