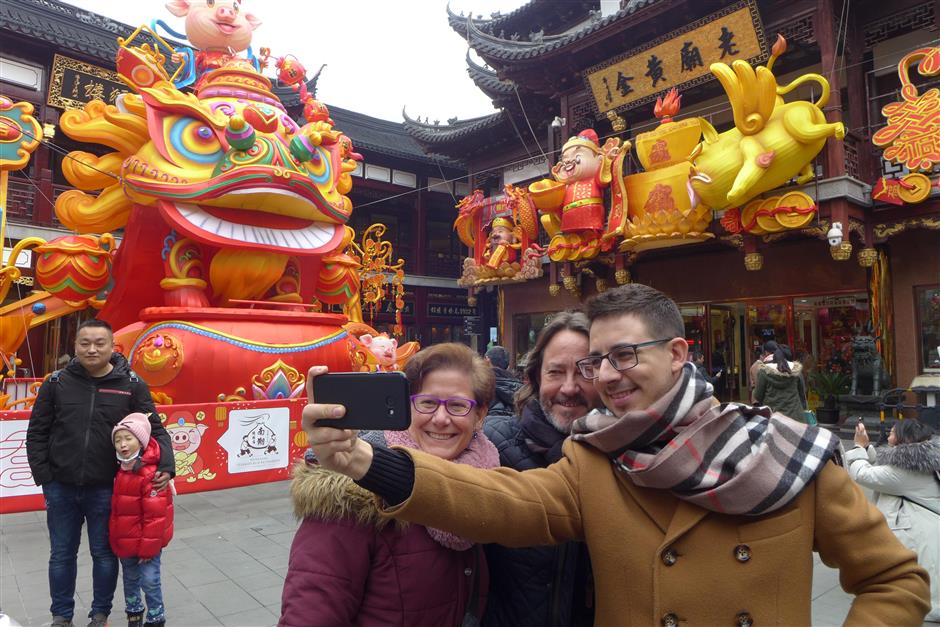 A lantern show illuminating the Yuyuan Garden has initiated Shanghai’s month-long celebrations of the upcoming Chinese Lunar New Year and the following Lantern Festival, which is also regarded as the city’s biggest challenge in tackling a large visitor flow.

Decorated with traditional lanterns in various shapes, the Yuyuan Garden in Shanghai’s downtown is hosting the 2019 Lantern Festival, starting Monday and running until Feb. 22.

The show has free entry, with the exception of the period between Feb. 15 and 19, around the traditional Lantern Festival, when the organizer requires visitors to buy tickets online, as the ticketing system can timely and automatically alert buyers when the number of visitors reaches the limit.

Listed as one of China’s intangible cultural heritages, the historical garden has hosted the lantern show for 24 years. The 2018 show set a daily record of 260,000 people.

The garden’s administrative office said special equipment has been installed in the park to monitor the density of the visitor flow. It has also designed a one-way itinerary to keep visitors moving in one direction in the show area to reduce the risk of stampedes.

Visitors are attracted by the traditional cultural customs of the Spring Festival in the garden.

During celebrations of the Year of the Pig, the main set of lanterns located at the central plaza of the shopping area in the garden is made in the form of a nine-meter tall cartoon pig dressed as a god of good fortune. It is surrounded with lanterns in the forms of the 12 Chinese zodiac signs, conveying the message of family reunion.

On the exterior walls of the ancient-style buildings surrounding the plaza, there are hanging lanterns made in the shapes of China’s high-tech achievements of national pride including the C919 large passenger airplane, Fuxing bullet train and the Chang’e probe and robots.

Through the month-long celebration, there will be a series of cultural exhibitions and interactive activities in the garden to allow visitors to be immersed in traditional Chinese culture. A lantern show illuminating the Yuyuan Garden has initiated Shanghai's month-long celebrations of the...