Shanghai laid out next year’s main tasks covering eight areas on Friday at the sixth plenary meeting of the 11th Shanghai Committee of the Communist Party of China.

The committee put deepening reform and opening-up in first place. It said the city would “exert all efforts” to complete the three new important missions entrusted to Shanghai by the central leadership: expanding the Shanghai Pilot Free Trade Zone, launching a science and technology innovation board on the Shanghai Stock Exchange and experimenting with a registration system for listed companies, and enhancing the enforcement of the national strategy of integrated development in the Yangtze River Delta.

The committee pointed out that the three missions and the import expo are the four main strategies for Shanghai to further promote reform and opening-up and will be important work for Shanghai for a long time to come.

The committee said Shanghai would also push forward high-quality economic development by establishing modern industrial systems, speeding up the steps to build itself into international centers for economy, finance, trade, shipping and innovation, promoting the Shanghai brands in services, manufacturing, shopping and culture.

Rural revitalization, prevention and treatment of pollution, comprehensive treatment of garbage, construction of green ecological spaces and improving the business environment are also among Shanghai’s key tasks next year. The Office for Safeguarding National Security of the Central People's Government in the Hong Kong Special Administrative Region was inaugurated on Wednesday. A plaque bearing... 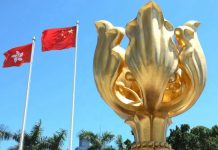 Chinese lawmakers Tuesday voted to adopt the Law of the People's Republic of China on Safeguarding National Security in the Hong Kong Special Administrative...

Chinese Premier Li Keqiang on Thursday said he was confident the measures China was taking to support jobs, livelihoods and businesses amid the economic...
Load more