Activities are being organized around the city to celebrate the 35th Teachers’ Day on Tuesday.

These include a movable studio set up by Shanghai Education Commission at downtown Sinan Mansions, where people can express their thanks for their teachers. 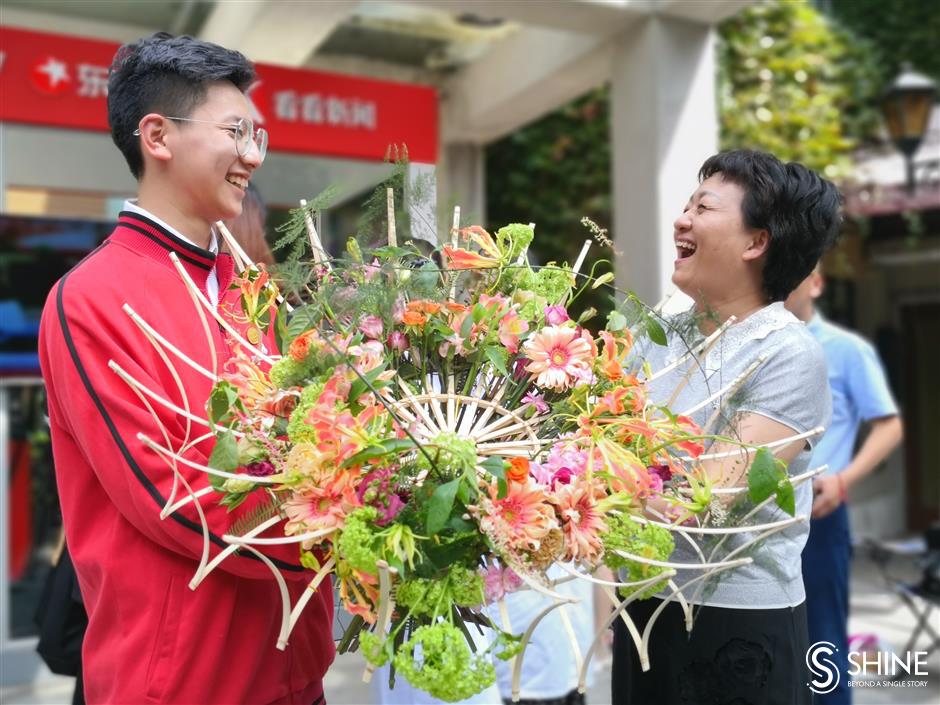 Lu Yiwei, who won a gold medal in floristry at the 45th WorldSkills Competition in Kazan, Russia 15 days ago, showed up at the studio on Monday to thank his teachers Zhu Yingying and Lu Duojia for their contribution to his success in the “Olympics for skills” event

“In the past two years, they have helped me with the training, which made my winning possible,” he said. “They had been so nitpicking that they could always find fault when I was proud of my performance and push me to hone my skills further. I had complained about that but when I was in the competition, I realized it was all worth it. Many competitors made mistakes during the process, but I didn’t because I had been trained by them to the highest standards. Here I want to say ‘thank you’ to them sincerely and wish them a good Teachers’ Day.”

The 18-year-old presented a bouquet to Zhu in front of the studio.

“It’s shaped like a sun, symbolizing the role of teacher that benefits a lot of people,” said Lu.

The studio also attracted some foreigners.

Hong Hiju, a Korean student of Zheng Minhua, a surgeon at Ruijin Hospital, said she had been living and studying in Shanghai since childhood as her father had been deployed to China by his company.

“Later my parents returned to South Korea, but my younger brother and I decided to stay in Shanghai as we grew up here and love the city,” she said. “Dr Zheng has been not only mentoring my study, but also my life. For example, when I was unable to join my family at traditional festivals, they would invite me to their home and enjoy home-cooked dishes as one of their family. I’m really grateful to their help.”

On the Bund, the walls of skyscrapers in the Lujiazui area are being lit up with words carrying blessings for teachers from 8-9pm from September 8 to 16. The messages were collected from the social media accounts of the commission and local universities. More than 100 were received and about 30 of them were chosen to be displayed.

On Sunday, more than 40 students and teachers from local universities and schools gathered on the west bank of the Huangpu River with their messages. Activities are being organized around the city to celebrate the 35th Teachers’ Day on Tuesday.