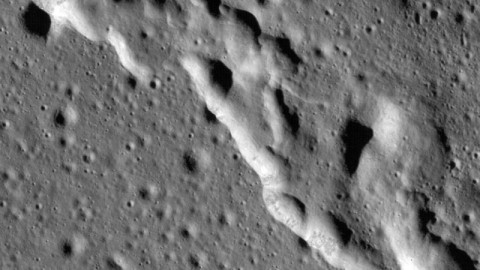 The moon is steadily shrinking, causing wrinkling on its surface and quakes, according to an analysis of imagery captured by NASA’s Lunar Reconnaissance Orbiter published on Monday.

A survey of more than 12,000 images revealed that lunar basin Mare Frigoris near the moon’s north pole — one of many vast basins long assumed to be dead sites from a geological point of view — has been cracking and shifting.

Unlike our planet, the moon doesn’t have tectonic plates. Instead, its tectonic activity occurs as it slowly loses heat from when it was formed 4.5 billion years ago.

This, in turn, causes its surface to wrinkle, similar to a grape that shrivels into a raisin.

Since the moon’s crust is brittle, these forces cause its surface to break as the interior shrinks, resulting in so-called thrust faults, where one section of crust is pushed up over an adjacent section.

As a result, the moon has become about 50 meters “skinnier” over the past several hundred million years. The moon is steadily shrinking, causing wrinkling on its surface and quakes, according to an analysis...