Team OG won the final of The International 2019 (TI9), a Dota 2 eSports tournament at the Mercedes-Benz Arena in Pudong on Sunday, while Chinese teams occupied three positions in the top eight.

It’s the first time that The International was staged in China, which was also the ninth iteration of the Dota 2 world championship. More than 600,000 people watched the games online while thousands of domestic and overseas audiences turned up at the arena to witness Team OG pocketing at least US$15.6 million in prize money. The total prize pool reached an eSports-record of US$34.3 million this year.

A total of 18 teams from Europe, Russia and Southeast Asia, each with five players, took part in the annual competition of professional players specializing in the hugely popular online game. In a Dota 2 game, two teams compete by selecting characters known as “heroes,” each with a variety of innate skills and abilities, and cooperate together to be the first to destroy the base of the other team, which ends the match.

eSports has created a buzz, with TI9 and ChinaJoy being held in Shanghai this summer. A whirlwind of fans, professional players, gaming gear, prize events, and broadcasting and training sessions have caused the phenomenon to be dubbed the “NBA or World Cup of the digital world”.

In the first six months of this year, eSports revenue in China rose 11 percent from a year earlier to 46.5 billion yuan (US$6.56 billion). The industry draws in some 500 million people.

As a welcome to TI9 and its players, representatives of the 18 teams gathered at the iconic Bund, on the invitation of Shanghai Vice Mayor Zong Ming, on Saturday, a day ahead of the Grand Final, for a mobilization ceremony. Officials from the local sports and tourism bureaus also attended. 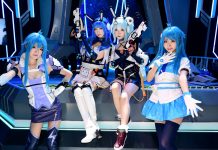 Team OG won the final of The International 2019 (TI9), a Dota 2 eSports tournament at the Mercedes-Benz...