The Tianma Telescope- a 20 year dream for last generation’s astronomers; an “eye in the sky” that witnessed every move which the “Chang’e” lunar probe took; an important member of the telescope network that humans created to be bigger than Earth’s diameter.

This radio telescope ranks the biggest in Asia, and third largest in the whole world. It is located at the foot of Tianma Mountain in Shanghai Songjiang, and has gone through more than 10 years of design, construction, debugging, and usage. The Tianma Telescope has gained merit in the scientific and lunar engineering field, and it won the Progress Award (Special Class) at the 2018 Shanghai Science and Technology Awards. 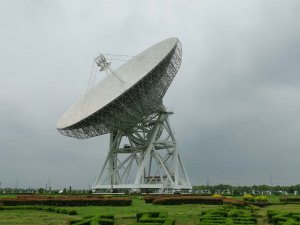 Towards the end of 2009, the construction for the Tianma Telescope began. To build such a large radio telescope, it is necessary to attain high-precision pointing, high receiving efficiency, and low temperature broadband reception. The Tianma Telescope has already been in stable operation for 7 years, with a mere 0.3% malfunction rate. The telescope is currently working as the main VLBI device for tracking, and many missions, such as the Chang’e 5 launch and mars exploration, have already been scheduled in the next 10 or so years. It has truly become a “pillar of China”.

Shanghai plans to build more than 100 fully automated factories within the next two years. Our reporter looks at some examples towards realizing the...

It will probably take two to three months for scientists to calculate and release the exact height of Mount Qomolangma, the world's highest peak,... Xuelong 2, China's first domestically built polar icebreaker, has been in a shipyard for maintenance after its first Antarctica expedition, preparing for future sea...
Load more

The Tianma Telescope- a 20 year dream for last generation’s astronomers; an “eye in the sky” that...