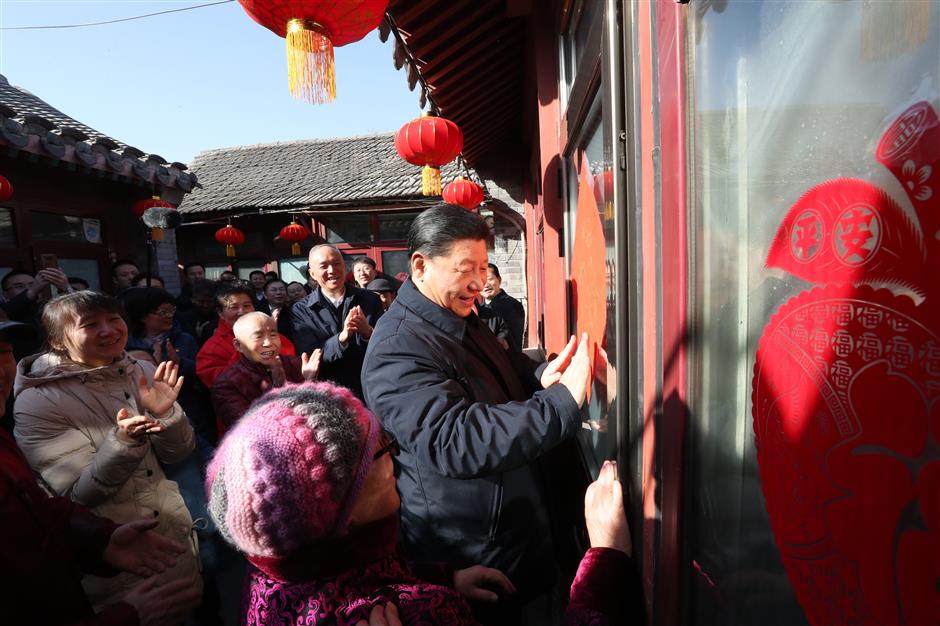 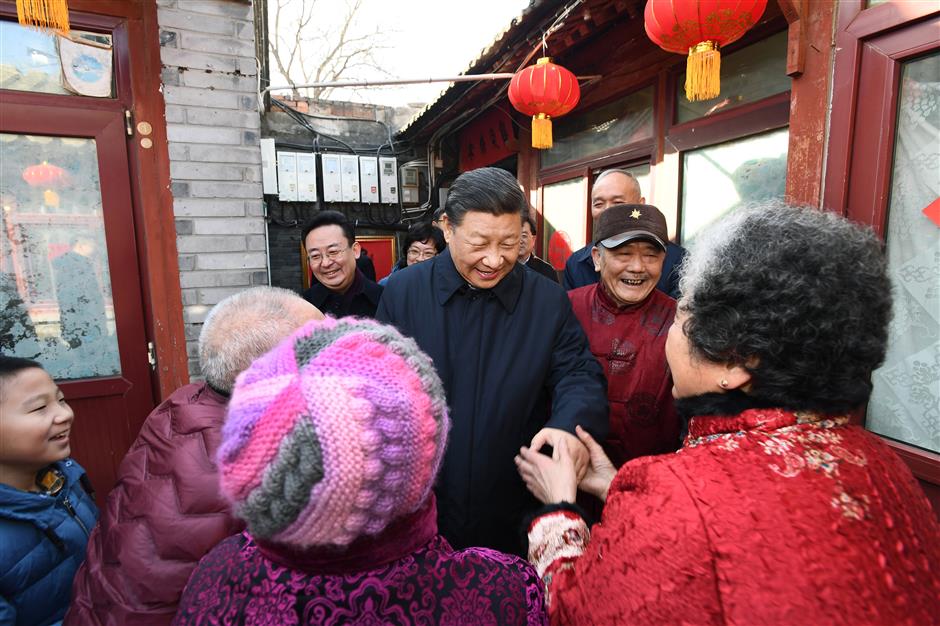 President Xi Jinping on Friday visited Beijing’s primary-level cadres and residents in downtown neighborhoods ahead of the Spring Festival and extended Lunar New Year greetings to Chinese people of all ethnic groups.

Xi, also general secretary of the Communist Party of China Central Committee and chairman of the Central Military Commission, also inspected the preparation work for the Beijing 2022 Olympic and Paralympic Winter Games.

When inspecting the Beijing Municipal Public Security Bureau, Xi stressed the city’s glorious mission and weighty responsibility to safeguard the social stability of the national capital as 2019 marks the 70th anniversary of the founding of the People’s Republic of China.

Xi asked for coordinated efforts to promote work in all fields with resolve to complete the mission.

He called for both improving local residents’ living conditions and protecting historical and cultural deposits, so that history and modernity will perfectly blend. He stressed specific measures to maintain the original features of hutong areas.

Xi dropped into two courtyards along the hutong, inquiring about the living conditions of local residents after the renovation projects in the neighborhood.

“What the CPC pursues is to make the people’s life better,” he told the residents, gladly chatting and making dumplings with them.

Noting close attention from the CPC Central Committee to the renovation of old towns and shanty areas, Xi said that the Party aims to create a more comfortable and better living environment for the people and solve problems they care about most so that they can enjoy modern life even in old hutong areas.

After chatting with residents, Xi went to a property service center to visit staff and community workers.

On the way back, Xi dropped in on a restaurant, chatted with the owner and some customers and wished them good luck. 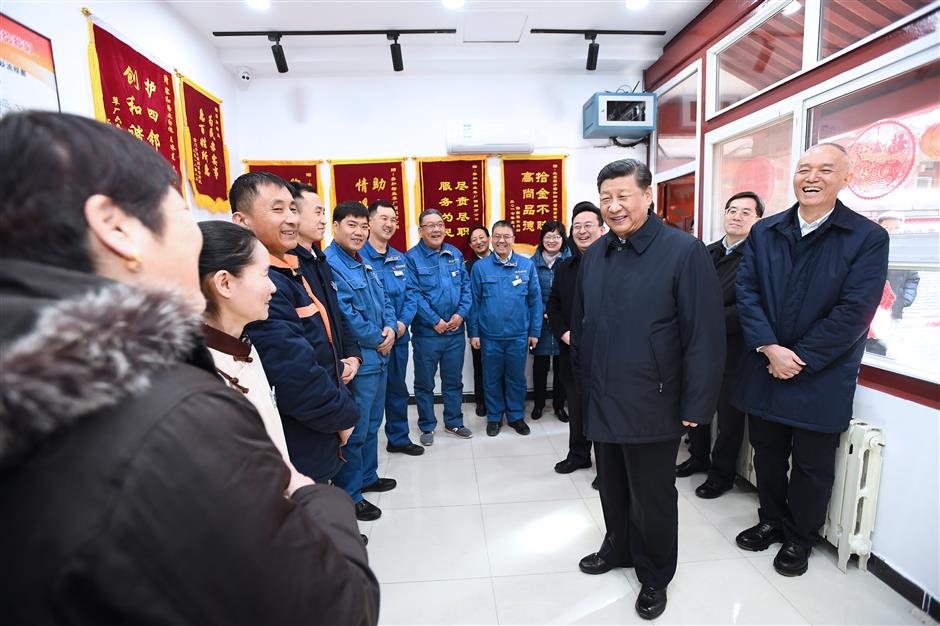 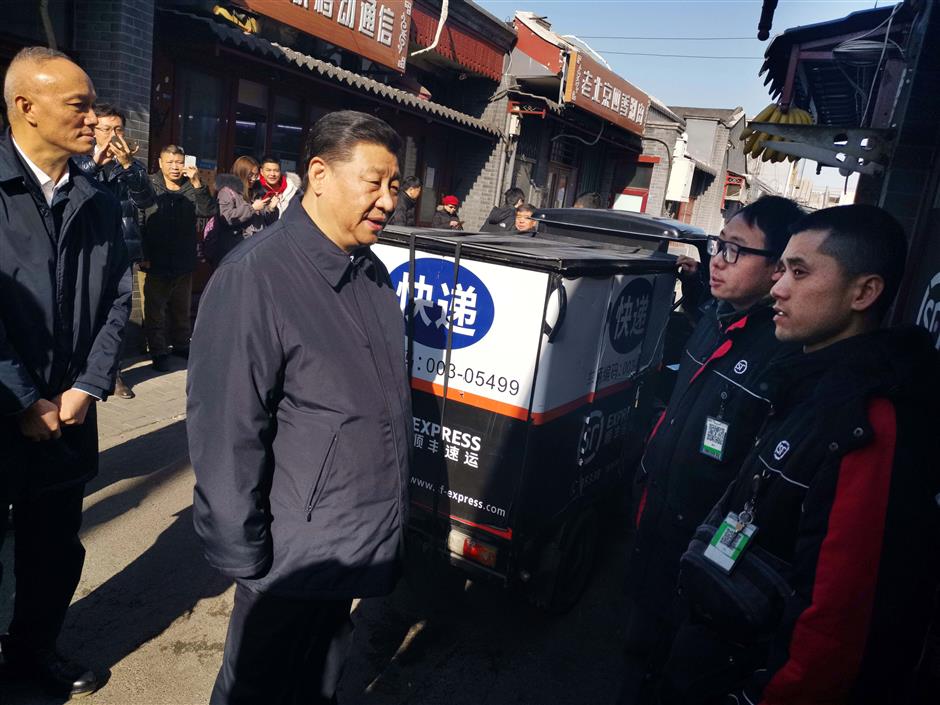 Xi also called on a nearby express delivery station and visited the deliverymen who were on duty, stressing that priority should be given to solving employment problems and creating more jobs.

At 3:30pm, Xi arrived at the Shougang Park in Shijingshan District, the seat of the Beijing Organizing Committee for the 2022 Olympic and Paralympic Winter Games, to learn about the preparation for the Games and the planning and construction of the venues and infrastructure.

Xi stressed the need to stay committed to hosting the Games in a green, sharing, open and clean manner, and to complete all preparation tasks with high standards.

The venue construction must meet the Olympic standards and be completed on time, Xi said.

Stressing that the features of technology, intelligence, greenness and frugality should be highlighted, Xi said advanced technological approaches should be applied, energy-saving and environmental friendly requirements should be strictly enforced, the environment and cultural relics should be well protected, and Chinese styles should be on full display.

Xi visited the office building of the Beijing Organizing Committee, meeting with some of the staff and volunteers there.

Noting that Beijing will become the world’s only host of both the Summer and Winter Olympics, he stressed that China must fulfill the solemn commitments it made to the world.

“Hosting the 2022 Winter Olympics is an important support to the coordinated development of the Beijing-Tianjin-Hebei region,” Xi said, adding that Hebei Province must develop together with Beijing.

During his visit to the national winter sports training center, Xi stressed promoting sportsmanship with Chinese characteristics, boosting coordinated development of mass sports, competitive sports and the sports industry, and speeding up building China into a country strong on sports.

Vice Premier Han Zheng, also a member of the Standing Committee of the Political Bureau of the CPC Central Committee, accompanied Xi on the inspection tour of the preparation work for the Beijing 2022 Olympic and Paralympic Winter Games.