Chinese President Xi Jinping said in Kathmandu yesterday that anyone attempting to split China will be crushed and any external force backing such attempts will be deemed by the Chinese people as pipe-dreaming.

Xi made the remarks in talks with Nepali Prime Minister K.P. Sharma Oli, who said his country firmly supports China in safeguarding its sovereignty and territorial integrity and stands firm in upholding the one-China policy.

“Anyone attempting to split China in any part of the country will end in crushed bodies and shuttered bones,” he told Oli, according to China’s state broadcaster CCTV. “And any external forces backing such attempts dividing China will be deemed by the Chinese people as pipe-dreaming!”

Nepal, added Oli, will never allow any force to use its territory for separatist activities against China.

Xi stressed that his country appreciates Nepal for its firm adherence to the one-China policy and its staunch support for China on issues concerning China’s core interests.

Calling Nepal and China true friends and partners, Oli said the two countries have always respected each other, supported each other and never interfered in the internal affairs of the other, adding that their traditional friendship is unbreakable.

No matter how external circumstances change, Nepal’s friendly policy toward China as well as the development of their friendly relations will remain unchanged, Oli said.

Xi, the first Chinese president to visit Nepal in 22 years, arrived in Nepal on Saturday on a state visit.

Xi said he has been deeply impressed by the warmth and hospitality toward China shown by the president, prime minister, ministers, party leaders and the people of Nepal.

Xi said that it is demonstrated that the China-Nepal friendship, standing as high and magnificent as the Himalayas, has taken deep root in Nepal, which has consolidated the confidence in developing friendly bilateral relations.

Nepali President Bidya Devi Bhandari hosted on Saturday evening a grand welcome banquet in the honor of her Chinese counterpart.

The two countries agreed on Saturday to upgrade their relations to a strategic partnership of cooperation featuring ever-lasting friendship for development and prosperity.

Xi said that he came to Nepal as scheduled after Bhandari warmly invited him for a visit this year when they met in Beijing in April. He also agreed with Bhandari that there is only friendship and cooperation between China and Nepal.

Xi said that he saw sincere smile on the faces of the Nepali people and felt the friendship from the deep of their heart toward the Chinese people, adding that he felt once again that the China-Nepal friendship enjoys broad consensus and solid foundation in Nepal.

The two peoples have shared weal and woe, and set an example of friendly exchanges between neighboring countries, said Xi, adding that he hopes to carry forward the traditional friendship and take the bilateral relationship to a new and higher level.

Xi called on the two sides to consolidate the political foundation of bilateral ties, and set the building of a community with a shared future as a long-term goal for the development of China-Nepal relations.

The two sides should build an all-round cooperation pattern, carry out the construction of a trans-Himalayan connectivity network, and expand exchanges and cooperation in various fields, Xi said.

A stable, open and prosperous China will always be a development opportunity for Nepal and the rest of the world, the Chinese leader added. 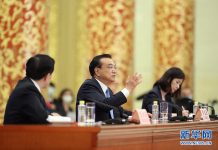 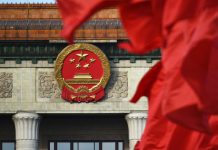 Chinese President Xi Jinping said in Kathmandu yesterday that anyone attempting to split China will be...