Putuo District will share education resources with neighboring cities in the Yangtze River Delta region to improve education quality and boost the integrated development of the region.

The district government signed an agreement with Suzhou in neighboring Jiangsu Province, Jiaxing in Zhejiang Province and Wuhu in Anhui Province on Thursday to jointly establish an education league.

The cities will share experiences on reforms to the gaokao (college entrance exam), modern school construction, training for headmasters and teachers, as well as conduct social practices across the region.

The cities have their own advantages and weakness in education, and the league can help to promote the strengths and cover shortages, said Lu Jing, director of the Shanghai Education Commission.

“The education quality in Shanghai, for instance, might be better than other Chinese cities, but facilities such as per-capita sports and art spaces are lagging behind,” Lu said.

Under the agreement, students can take research and study trips, while teachers can be trained by talented educators and headmasters across the cities, Lu said. Core teachers can also be exchanged regularly and teach in schools among the cities, he added.

The Yangtze River Delta region is expected to become a demonstration zone on education for other Chinese regions and become a world-leading region on education quality, Lu said at the signing conference on Thursday.

Putuo will host two major education forums in November. They include a global headmasters’ forum with headmasters from the Yangtze River Delta region and the United States, the United Kingdom, Finland and Israel, said Cao Liqiang, Party secretary of Putuo. Exam Time Is Here, And So Is Demand For Whatever Keeps Students Healthy

China’s College Entrance Exam, or gaokao, started yesterday. They are crucial to a student’s future as it determines which university they get into. And...

50,000 high school students started their first day of the National College Entrance Exam, or gaokao, yesterday at 104 test sites scattered around the... 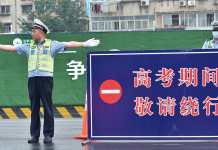 The annual the national college entrance examination, or Gaokao in Chinese, could be deemed as one of the most important and influential exams in...
Load more